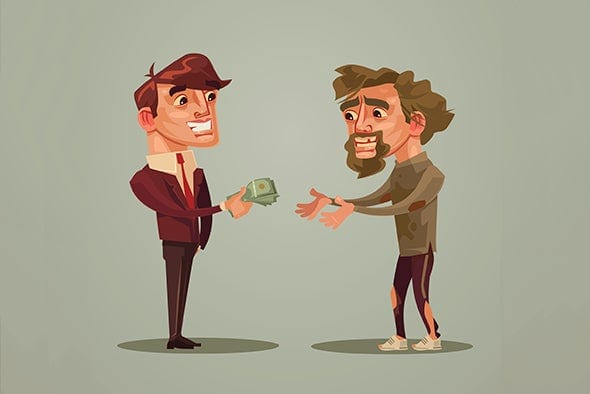 What motivates people to give to charity? Surprisingly, the most obvious answers to this question have been difficult to prove. For example, having a desire to give is often not enough: many people who express a strong intention to make charitable donations often fail to follow through on their intentions. The research is also mixed on whether people with more money are more likely to give it away. While some studies suggest that wealthier people are more likely to donate money, other studies do not.

A recent paper by psychologists Ashley Whillans, Eugene Caruso, and Elizabeth Dunn suggests a potential new explanation as to what motivates people to give to charity. When a donation request resonates strongly with our self-image, they argue, we are more likely to feel charitable. Across three studies, they found that people who earn less money are more likely to donate to charity when presented with a request that emphasizes social connection and community. In contrast, wealthier individuals are more likely to give money when presented with a request that appeals to their sense of independence and self-reliance. Whether you behave selfishly or generously may depend less on what you have and more on whether a request for help fits with how you see yourself.

The researchers’ first study examined the behavior of people who visited the website for The Life You Can Save, an organization that promotes charities dedicated to ending extreme poverty. Website visitors were asked to participate in a survey in exchange for a complimentary book, and a total of 185 (58% female) online visitors were successfully recruited for the study. The survey asked participants to report their gender, age, ethnicity, and household income. Participants then read one of two donation appeals. Half of the participants read an “agentic” appeal that characterized The Life You Can Save as an organization that spreads “knowledge of what each person can do individually to reduce poverty.” The other participants read a “communal” appeal that said the organization spreads “knowledge of what all of us can do together to reduce poverty.”

After reading one of these two appeals, participants were given the opportunity to click on a link labeled “Donate Today” that took them to a new webpage where they could make a donation. They found that the wealthier participants, as defined by those with an income of $90,000 or above, were more likely to click the “Donate Today” link when presented with the agentic appeal that talked about what each person can do individually to help poverty. Less wealthy participants, or those earning $40,000 or less, were more likely to click the donation link when presented with the communal appeal that referenced what everyone can do together to reduce poverty. The researchers found no relationship between clicking on the donation link and gender, ethnicity, or age.

The finding is telling, but the study was limited because they were unable to prove that the wealthier participants actually did donate money after seeing the agentic appeal that emphasized individualism. (Technical restrictions made it impossible for the researchers to determine whether those who clicked on the donation link actually gave money.) To try and make a stronger case for their hypothesis, they ran two additional experiments in public places. One study recruited 474 participants who were visiting a science museum in Vancouver, Canada. Participants first completed the same survey asking them about their background and income, as described in the previous study. And, as in the previous study, they were asked to read either the agentic or communal appeal to donate to charity. They were then told they were being entered into a lottery for the chance to win $100 and had the option to donate some of their winnings to charity.  It was explained that the decision to donate was binding if they did end up winning.

Approximately 87% of all the participants chose to donate at least some of their potential winnings to charity. Wealthier participants appeared more generous after reading the agentic appeal – it led them to donate more of their winnings to charity.  Less wealthy individuals donated more after being presented with the communal appeal. Once again, other characteristics of the participants, such as their age and gender, had no relationship with how much they chose to donate.

Why would wealthier individuals feel more generous when presented with the agentic appeal? Past research has shown that people with higher incomes tend to have a greater sense of personal control. Money allows people to meet their personal goals without needing to rely so much on others, and this may affect how they see themselves. Research also shows that people with lower incomes tend to see themselves as more connected to others, maybe because they need to rely more other people in their everyday lives. These findings have led some researchers to speculate that as people become wealthier, their caring and compassion for others decreases. However, the present research suggests this may not be the whole story. Wealthy people do demonstrate high levels of caring when a request for help resonates with their greater sense of personal control. By emphasizing individual impact, charitable messages might be more effective at motivating wealthier people to act generously.

Of course, more research is needed to figure out whether tailoring messages matters for other kinds of giving aside from donating money. It would be useful to know if the same type of framing also affects whether people commit to volunteering their time or donating blood. Still, these findings point towards new possibilities for helping non-profits and other charitable organizations figure out how to make appeals that have the highest possible chances of success.